Saturday evening found me on the 7 train off to watch the Mets play the Phils, an uneven match up of Misch vs. Halladay, when I received a text from awesome WPIX field correspondent and Pick Me Up Some Mets friend Debra Alfarone.

This would be K-Rod’s first game back after his two-day suspension for…sigh…beating his fiance’s father in full view of the clubhouse family lounge. At the time, Mets fans figured he was back–our hot head closer on the day of his public apology. Debra was at Citi Field interviewing fans to see if they accepted K-Rod’s apology, and to see what happened next.
Before heading in to watch the game with a friend, we stopped off to talk with Debra about what K-Rod needed to do to smooth things over with his teammates. The clip caught the last part of the interview, and I’ll add the caveat that I’m much more comfortable writing than speaking! K-Rod’s actions were bad enough before–and I can’t say (as the clip says) that I do think management would have forgiven him–but now the fans are unlikely to ever speak his name well again. And there’s no hope of making up his actions to his teammates.
K-Rod’s temper turned out to make him a bad teammate, embroiling his comrades in the worst way in his own personal turmoil. He’s out for the season, likely never to wear a Mets uniform again, and now our beleaguered team has no closer. Help us Hisanori Takahashi, you’re our only hope.

Here’s K-Rod’s last time entering the field. The boos were louder on the broadcast. Badly done, K-Rod, injuring yourself, your family, and the team we root so passionately for.

But despite the unfortunate circumstances, this past Saturday, I loved seeing talented Debra Alfarone at work, and I hope PIX features many more of her segments to come. Here I am with my friend Tobey, Debra, and her awesome cameraman. Add in a green-themed cap giveaway for Irish Day (Tobey and I got the very last two at the left field gate!), steak tacos, and a frozen mango rum drink to the great company, and we proved it’s still possible to have a fun time at Citi during a disappointing season. 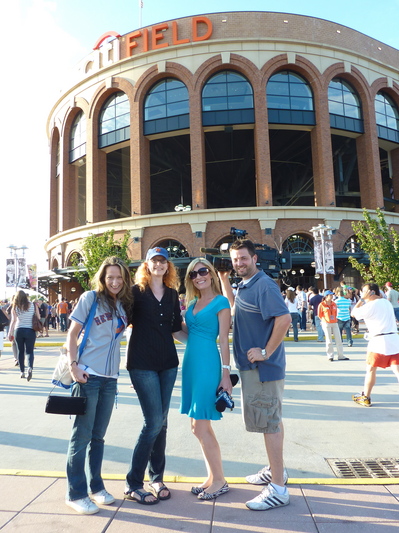