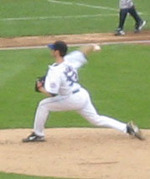 I’m glad that Saturday’s game was my last of the regular season at Shea. For the most part, it turned out to be a delightful day. Maine didn’t pitch his best ever, but the offense turned it up like it hasn’t much in the past couple weeks and cranked out 12 runs to win the game against the Nationals.

Also? There was a giveaway. Bucket hat s, while not necessarily attractive, are definitely fun. Just ask Rob!

You should for sure check out the whole photo album, because I caught some great shots of the on field action.

Which brings me to the not so fun. Oh, God. Seeing Nick Johnson collide in a squirmworthy injury that we would later find out is a fractured femur? Ouch, is all I can say.

It was tough to watch. But because the injury occured right in front of us, I got some really good pictures of the poor guy. Skip past that part of the album if you just don’t want to see the pain.

After the game, Rob and I waited on line for the clubhouse store  because there was a certain–sigh–Kids’ long sleeved t-shirt that I’d admired in the dugout shops but hadn’t been able to find in a Medium. While that shirt remains lost to me, I did purchase a SUPERB kids jersey to wear post-season.

And I took a moment to pose with my man (erm…my other man) Cliff Floyd.

Which brings me to the most fun part of the day! After waiting on line for so long and (frustratingly) trying on so many poor fitting women’s shirts (I know, I know. Dead horse, I’ve beaten you senseless), it was quite late by the time Rob and I sauntered out of Shea. And–who knew?–when we got to the Mets Office exit, there was a group of people waiting to see who would come out.

Clearly I had to make Rob wait to see if any of our beloved Metsies would cross the threshold. And clearly because a) Rob is everything generous and good, and wants nothing more than to make me happy and b) Rob’s life would have been a living **** if he had said I couldn’t wait, we waited there a goooooood long time. But it was worth it!

You can see all the people we saw at the end of the album, including (in chronological order) Nats manager and hall of famer Frank Robinson, our own Omar Minaya (!), Michael Tucker, and

Chris Woodward’s cute-as-anything daughter, his super nice wife, and his generous, smiley, good-hearted self. I haven’t given Chris Woodward much credit this season, but the guy’s been playing injured, he had a great game Saturday, and he and his wife sought out kids and fans outside the Mets Office to give them a little something extra special after the game. Every single fan outside couldn’t stop exclaiming how lovely Woody and his wife were.

And his daughter? Oh my GOD she’s cute. She must be about 3 or 4, and you can tell she adores (and resembles!) her daddy. While Woody was signing, all smiles, she would hide behind the door to the Mets Office, opening it a crack and yelling "Daddy, look what I can do!" Then when he turned around, she closed the door to hide herself inside again. DYING of cuteness.

I’ve got more pics of Woody in the album, including this one of a group of girls his wife beckoned over for a picture. Their father was watching, as he exclaimed, with "goosebumps."

After Woody, and also in the album, we saw Mota and one of the Wilpons.

All in all, it was a perfect way to end a (mostly) wonderful day at Shea.

Now (almost) on to post-season!

And come on, Mets. Let’s get our game back on right and give it everything.